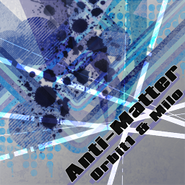 Teaming up with UK hardcore producers Orbit1 and Milo
we've put something together that is a hybrid of dance floor and high energy!
With tones of music elements to make you go crazy the genre
is a cross mashup between UK Hardcore, Drum n Bass, Breakbeat,
Industrial and even some elements of electro at an extreme BPM!

Retrieved from "https://dancedancerevolution.fandom.com/wiki/Anti-Matter?oldid=15783"
Community content is available under CC-BY-SA unless otherwise noted.