Anything related to computers

Emi Toshiba (東芝 恵美, Tōshiba Emi?) is a character in the Dance Dance Revolution series. She has the first voiced by Erica Mendez (English only)

Her family runs an electronics store, and she’s a whiz with machines, but does not do well with computers. Her classmates at school are building a dance robot, and Emi’s been put in charge of 'moral support'.

Emi's family runs an electronics store, and she's a whiz with machines, but not so good with computers. After graduating from a technical high school, she studied at an electronics academy. With her classmates, she develops dance robots to parcitipate in robot contests (her area of specialty: cheering -- bringing honey lemon preservatives).

Later, she passes the audition for a popular dance program as she states. "Watch me everyone! I'm going to do my best!". She spends all of her free time practicing her dance moves.

Here is what the designers of Emi have to say:

"There were actually two different competing visions for this character. In the end, we decided to make her cute, which made both sides happy. She’s a sharp dresser!" -DDR X

Emi is described as a kind, cheerful and happy young girl. She is also seen as kind and also nervous for anything big such as attending Disco's party in DanceDanceRevolution X's Street Master Mode.

Her character reveals that she is also a big eater as seen from Queen-Zukin's story.

Emi has shoulder-length blue hair which is styled in a short bob with fringes and brown eyes, and is mostly seen wearing a white hat with different color lines at the edge.

Emi finally made it to the party. Once she got there, the party really got started! Wearing her dazzling new dress, Emi was the center of everybody’s attention. Now she can’t wait for the next party.

In DDR X2, it is revealed that Emi just passed the audition for a popular dance program, and she spends her free time practicing her dance moves.

Emi and Disco were shocked that aliens had invaded Earth, and they would have to stop them.

The aliens had started invading Earth, and Emi tried to find a way to stop them. However, Disco realized that they could dance to intercept the invaders.

Emi and Disco destroyed the first fleet of UFOs, and while they were making a battle plan, Emi suddenly became abducted, leaving Disco to scream out in anguish as the UFO took her captive.

While having no appearance in Chapter 3 of the storyline, Emi was mentioned by Bonnie and Disco.

The last UFO fleet had come, and as Disco took down the UFOs with his dancing, he accidentally destroyed the UFO that had supposedly abducted Emi in Chapter 2.

Emi finally escaped from the aliens before they could take her away, as Bonnie and Disco finally made the last of the UFOs leave Earth. Things had returned to normal, and Disco promised to see both Emi and Bonnie next time.

Emi at the party with her friends at the end of her story.

Emi with her hand fan. 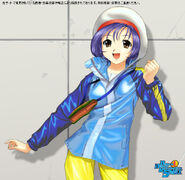 Emi and Rage in 3rd Mix

Emi, as shown in the end of LOVE IS THE POWER -Re:born-'s background video.

Disco and Emi as they appear in the beginning of She is my wife's background video.

Community content is available under CC-BY-SA unless otherwise noted.
Advertisement