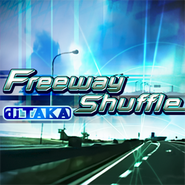 Album art.
Add a photo to this gallery

This is an upbeat, melodious, trance-pop track.
In the 10 years that I have been at Konami, this is the first track that I have made completely for DDR.
With NAOKI's advice, it was a very natural process to compose this track. Thanks NAOKI!


My initial approach to this song was based on my image of American suburban driving, with lots of heavy traffic.
It is like dancing among a huge crowd at a club.
But even though the song is called "Freeway Shuffle", it did not end up with the shuffling feeling that I had intended.
So I felt, "oh well... it is still a great song!"

Retrieved from "https://dancedancerevolution.fandom.com/wiki/Freeway_Shuffle?oldid=11542"
Community content is available under CC-BY-SA unless otherwise noted.