None except for a robotic voice clip of “Go For The Top” that is played twice throughout the song, and a final soundbite (spoken again in the same robotic voice): “KONAMI Arcade Championship!”

The "rising fireworks" BG video clip from DDR EXTREME appears at the very beginning of the song, and during the brief double BPM speedup. 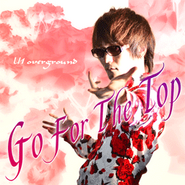 Go For The Top uses the purple Replicant D-action dance stage for its background video.

As of 07/30/2013, Go For The Top now uses the blue Replicant D-action dance stage rather than the purple one.
Add a photo to this gallery

All except for one hot loser
Will give up even hotter than this song.

Retrieved from "https://dancedancerevolution.fandom.com/wiki/Go_For_The_Top?oldid=15144"
Community content is available under CC-BY-SA unless otherwise noted.