Various soundbites can be heard throughout the song. 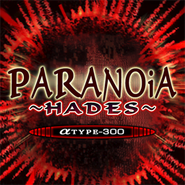 PARANOiA ~HADES~'s Challenge chart held the highest Voltage value of 200 at the time of its introduction.
Add a photo to this gallery

If my memory is correct, it was the 8th of August in 2006.
Under the perfect sky without clouds, I had arrived at a certain arcade in Tenoji, Osaka.
I was there to attend an event... yeah, for the commemoration of DDR`s comeback.
The place was packed, and I made a promise in front of all those people to produce a new PARANOiA...
At that moment, my spirit was drug deep into the underworld.
Hades had been calling me in my heart and told me that this was to be my new burden.
At that point I devoted myself to complete the production, all the while being afraid... aware of Hades always watching me.
The rhythm`s irregular change every four measures shows how nervous and disturbed I was due to Hades` continued presence.
Always running to escape from Hades and the underworld, I would lose my breath and scream out... yet still keep running... my fear of Hades escalating so that my heart rate reached 300... then, I saw something when finishing up the song.... it was a shadow with a huge sickle and the crimson red of...

Retrieved from "https://dancedancerevolution.fandom.com/wiki/PARANOiA_%7EHADES%7E?oldid=20780"
Community content is available under CC-BY-SA unless otherwise noted.