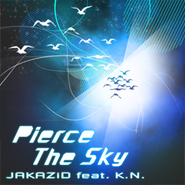 Pierce The Sky's boss character, a cyan-colored Rinon clone (right) vs Rinon (left).
Add a photo to this gallery

I co-wrote the original demo version of "Pierce The Sky" with K.N. during my final year of university.
Between then and now I've remixed it several times,
and it's surreal to think that the final definitive mix has been adopted for use in DDR,
especially as I have been a devoted fan of the series for over a decade now.
Within this track I thought a lot about the rhythm of each musical element
and how they could be translated into an interesting but fun step chart for DDR.
Additionally, I included the oldskool-style section with piano and breakbeats
to add some variety and excitement to the track before the final chorus.
An interesting piece of trivia about this song is that K.N. recorded the vocals in my closet
which I had converted into a vocal booth at the time.
Given the circumstances, I think the vocals were actually captured rather well!

JAKAZiD gave me the demo track for Pierce The Sky and I had an image of Vic Viper flying through space,
navigating out of tough spots and being unstoppable.
The message of the song is related to that; if you have your dreams,
don't be afraid to reach out for them despite how tough it may be. Let's go beyond and pierce the sky on high~ ♪
I wrote most of the lyrics on a commuter train.
That's not quite a spaceship zooming through the universe, is it? *laughs*
I've been a Bemani fan for ten years now and it gives me such a thrill to know that my song is in DanceDanceRevolution X2.
I hope DDR players will enjoy the song and maybe one day I'll be good enough to full combo it!

Retrieved from "https://dancedancerevolution.fandom.com/wiki/Pierce_The_Sky?oldid=13212"
Community content is available under CC-BY-SA unless otherwise noted.