Reiji "Rage" Itoh (伊藤 玲二, Itō Reiji?) is a character in the Dance Dance Revolution series. He was voiced by Michael Sinterniklaas (English only).

First introduced in 1999's Dance Dance Revolution 3rdMIX, Rage is a natural athlete, but he’s got a temper – hence the name. He’s out on the streets everyday bringing Japan’s traditional street food, takoyaki, to the masses. He wants to realize the American Dream and open up his own Takoyaki (a Japanese pancake filled with Octopus) restaurant. His friends are always saying how delicious his Takoyaki is (“We want more!” “We want more!”).

Here is what the designers had to say:

"The original concept called for a ‘street’-type character, so that’s how we designed him. We think he turned out pretty good looking." - DDR X

Rage is a natural athlete but he's got a temper- hence the nickname. Like Emi who helps her family business at the electronic store. Rage works at his family business who are selling liquor at the liquor shop despite he hates working in any errands or chores. He also does not get along well with his rival Izam in public when they fight each other for small things. A year later, Rage left his home in Japan and went to US on his own to realise his American Dream to open up his own Takoyaki Restaurant. He even calls them as a traditional Japanese delicacy. He also shares a room with his friend, holding part-time jobs and dancing in the streets. His friends are always saying how delicious his takoyaki is. He was soon chosen as a back up dancer for the famous artist. Recently, his takoyaki business is taken off, so he is having trouble balancing between the two. Tonight will be his first performance; he will bathe in the light of the stage.

Rage is described as a confident and brave person with a horrible temper (this is why his opponents including Izam hates him). Despite his temper, he likes Emi so much even as his partner up to EXTREME 2/STRIKE and onwards during her Street Master Mode in DDR X where he wants to go with her in Disco's party but with his takoyaki stand as the latter tells him that anyone can look good on the right clothes which he replies that he didn't say anything after he was defeated by her. He also has a heated rivalry with Izam since his introduction in Dance Dance Revolution 4thMIX which he was determined to outdance him in the dance contest as both were fighting each other like cats and dogs with just small things until his last appearance in Dance Dance Revolution Party Collection. Their rivalry also shows in DDRMAX during the background video in every songs where he and Izam are performing the cartwheel stand and they are not looking at each other after performing this move, showing their hatred with one another. He can also predict earthquakes.

In DDR X, He also shows to be stubborn if someone doesn't buy his takoyaki as seen throughout his story (when he urges Emi to buy his takoyaki). He also hates to lose when other characters defeat him in a dance battle as seen throughout both Disco and Zero's Street Master Mode where he wants to have a rematch with either of the two. Especially, when other people are doubting on his cooking as seen on his story when he angrily mad at Bonnie from her doubtful questions after the latter say that there's nothing creepy inside the takoyaki that he was currently making.

Rage is portrayed at first as a street dancer with a temper - that's how he got his nickname. Later, from SuperNOVA up to DDR X, he shows that he is continuing on as a local street dancer and now a popular takoyaki chef. In DDR X2 and onwards, he was later seen as a back up dancer for the famous artist.

Rage appears as a young Japanese male with brown hair, brown eyes and a goatee. Before DanceDanceRevolution SuperNOVA, his hair was shoulder length which is spiked upwards. In DDR SuperNOVA up to DDR X, his hair becomes darker and was cut short, although his hair still had spikes. In DDR X2 up to DDR2014, his hair is cut shorter and always covered with headwear (a cap in DDR SuperNOVA, a hood from his sleeveless hoodie jacket in DDR X, and a fedora hat in DDR X2), and the spiky hair has been lost. In DDR A, Rage regains his short spiky hair from his alternate appearance in DDR SuperNOVA2 but was grown into shoulder length like in the previous DDR games since DDR X2.

Rage didn't want to go into the family business, so he decided to leave Japan and strike out on his own. He spent his days working odd jobs and his nights as a street dancer. One day, he made some a takoyaki (a traditional Japanese street food) for his mates and they loved it.

He could hardly keep up with all the requests. Then it hit him:
“This could be my big chance. I could take takoyaki nationwide!”
And so, Rage sets out on his quest to make takoyaki famous!

This is the reason why Julio knows about Rage's takoyaki and his stand and during Yuni's Street Master Mode, he tells Yuni everything about Rage and his takoyaki stand in which she mentions about the new fast food stand.

At the Rocket Launch Pad, Baby-Lon pointed out about japanese pancake in which Rage mentions it was takoyaki and asking if he wants one. Baby-Lon likes the takoyaki and he wants some. Rage tells him that it was a little too hot for him and it will cool it off otherwise he will burn himself. Baby-Lon decides to dance while they wait for the takoyaki to be cooled. After a brief dance, Rage finally cool off the takoyaki he had made and gives it to Baby-Lon who actually likes it and stating that it was yummy.

Rage finally went to the train station and meets up with Emi as he comments something about her party dress. She tells him that she was invited in the party tonight (possibly In Disco's party) and noticing the takoyaki he was making and wants to have one. Rage then urges her to buy his takoyaki. Emi smiles at him and stating that he should not become cheap and challenges him in a dance. If she beats him in a dance she will get the takoyaki for free. After beating her, Emi finally pays him for his takoyaki as he angrily states to her "...Is this the first time someone's paid?"

Rage travels in the Final Stage Airport and meets up with Ruby and she states about the octopus he was cooking. Rage smiles if he say yes and asking if she likes octopus. Ruby replies that she loves octopus and she was swimming along with them but she never eats one. Rage then urges her to try and eat his takoyaki. After beating Ruby, she tastes the takoyaki and it was delicious. Rage angrily forgot to tell Ruby to pay her for his takoyaki.

It was the first time Rage forgot to charge money for them even he cooks them for free.

Bonnie noticed that Rage is here at the Race Circuit and wants to try his takoyaki as Rage agrees to let her try his takoyaki. Bonnie tries to hold back at the moment and asking what inside of the takoyaki (The same thing as Gus was asking). Rage became angered to Bonnie's doubtful questions making both of them challenge to a dance contest. After defeating her, she finally compliments that it was delicious after she eats the takoyaki he had made and she apologizes to him for doubting his cooking. Rage gladly smiles that she likes it as he accepts her apology.

Rage finally went back to the Revolution Park where he's formerly selling his takoyaki before moving to the carnival. Alice just passed by and noticed the takoyaki he was making and she hadn't eaten it for a long time and she wants it. Rage then gives her the nice and fresh takoyaki that leads both of them to dance. After a brief dance, Alice reminds herself living in Japan and it was a fun country rather than her home country. Rage hears it as he gives her more of his takoyaki.

At the Film Studio, Jenny arrives to say hi to Rage and knowing that he is eating octopus. He happily convinces her to try his takoyaki when he say yes. Jenny does not know as she shrugged stating that it sounds weird to her. Rage then challenges her to a dance contest if he can outdance her she will eat it. After defeating her, Jenny compliments that it was not half-bad as Rage replies that she sometimes needs to expand her horizons as she agrees to it.

Rage arrives at the Disco Tower and meets the mysterious and aloof guy named Zero and he never seen him before. Rage asks him to try his takoyaki as Zero coldly replies that he does not agree with fast food making Rage felt angered telling him to try it and eat it leading both to challenge themselves in a dance battle. After defeating Zero, he finally comments that it was an interesting flavor when he eats it. Rage happily comments that it was pretty tasty. Although, Zero rudely discards it saying that he will feed to his arowana back on his home making Rage feels agitated knowing that this is not a good idea.

In Zero's Street Master Mode, Zero manages to defeat Rage in a dance battle and Rage wants to know who he is after showing his killer dance moves. After Zero coldly introduced himself, he angrily tells him that the next time they see each other he's not going to lose to him. This would mean that this episode takes place where Rage has his chance to beat Zero after he beats him in a dance battle by try and eat his takoyaki to him.

Note: This releases Episode 9 when the player as Zero beats Rage in Episode 2 of Zero's Street Master Mode.

Rage returns in MAX Carnival after beating Zero in the Disco Tower. Disco arrives to see him and knowingly that he has some fine eats in the carnival he had stayed. Rage states that it was his version of "Soul Food". Disco comments saying that he thinks he has soul and wants to see him dance. After a brief dance, Disco was surprised to see him he got some soul into it and wants to cater his takoyaki to his party. Rage asks him if he's gonna taste the takoyaki first and Disco replies that is no need and finally gives advice to him saying that if he cooks like he is dancing and it's got to be good. Rage angrily thanked Disco for the advice and he will make sure he'll get all they can eat in the party.

At Disco's party, Rage’s takoyaki was a bigger hit than even he could have imagined. He was so surprised, in fact that he forgot to charge money for it… again. Rage’s signature soul food is not only delicious, but those who eat it say it makes them feel like dancing.

In DanceDanceRevolution X2, Rage's takoyaki business has taken off since he has been chosen to be a backup dancer for a famous artist, so he has trouble balancing between the two. 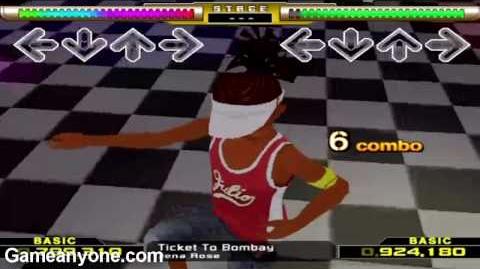 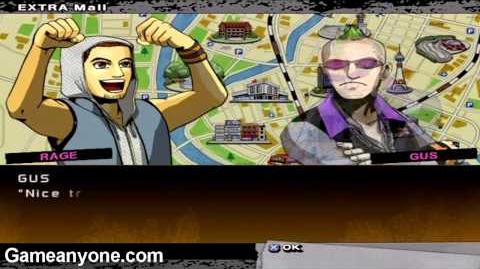 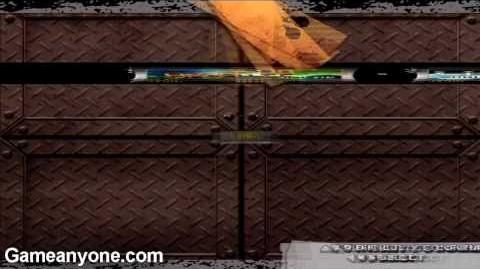 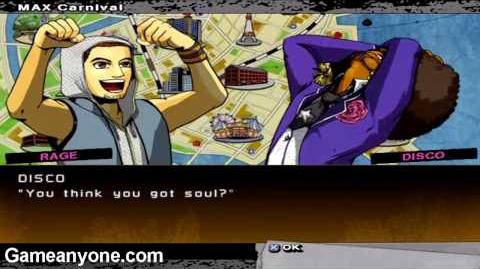 1/16
Community content is available under CC-BY-SA unless otherwise noted.
Advertisement