Replicant D-action is a boss song folder that appears both in the arcade version of DanceDanceRevolution X2 and the Wii console release DanceDanceRevolution II. Similar to the boss song series of the beatmaniaIIDX series like the EMPRESS PALACE of beatmaniaIIDX 16 EMPRESS and the Lincle Kingdom system of beatmaniaIIDX 19 Lincle, this is a series of difficult songs that each have their own requirements to access. Scoring AA or better on each song nets a colored medal, which has a different color depending on the song. The player also fights against differently colored Rinon clones depending on the song.

The Replicant D-action event ended on February 23, 2011, and all songs are available for play.

NOTE: Only one player can access the Replicant D-action folder.

Replicant D-action is available only to eAMUSEMENT. The table below shows the requirements for accessing each song and what color medal they have:

Replicant D-action is largely the same as its DDR X2 incarnation, except that four new songs (two from DDR Universe 3, and two new boss songs) have been added, and the songs are much easier to access, accessible by getting a certain amount of DDR Points. The four new songs are: 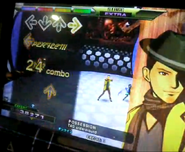 The pink dance stage, used only for Valkyrie dimension. 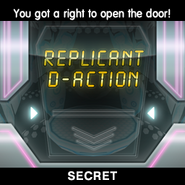 Folder image.
Add a photo to this gallery

Retrieved from "https://dancedancerevolution.fandom.com/wiki/Replicant_D-action?oldid=14368"
Community content is available under CC-BY-SA unless otherwise noted.