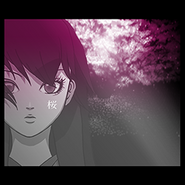 Japanese Banner.
Add a photo to this gallery

The cherry blossom is the the flower in the heart of the Japanese people. When you listen to this melody, you feel a strange sense of nostalgia welling up inside you; it is if something is awakening within our genes. The rhythm is based on that of MAXX UNLIMITED, and is generally refined and customized into what it is now. I was able to mix in the use of traditional instruments as I pleased thanks to today's synthesizer technology.

We've recently made a lot of songs that have at their foundations classical Japanese traditions and musical ideas, but more and more the Reven-G name is looking more towards Europe for its ideas.

Retrieved from "https://dancedancerevolution.fandom.com/wiki/SAKURA?oldid=16479"
Community content is available under CC-BY-SA unless otherwise noted.