Several vocal clips, including "Move your body", "Come on DJ work this party", and "Look up in the sky, it makes you feel so high". 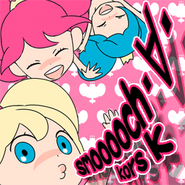 DDR S+ banner.
Add a photo to this gallery

This is "SigSig 2", with three different princesses running about.

Originally, for EMPRESS, I was going to have one tomboyish princess running around the screen having her clothes change three times.

This movie is worthy to be considered as a sequel to SigSig and continues what I wanted to do with the SigSig video, which was dancing with full animation.

Remember to watch the parts when the girls try to throw in a last kiss!

I appreciate this and enjoy playing whenever possible.

I am now going to take a bow.

Retrieved from "https://dancedancerevolution.fandom.com/wiki/Smooooch?oldid=20851"
Community content is available under CC-BY-SA unless otherwise noted.