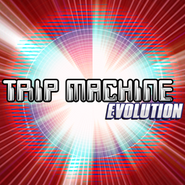 2ndMIX mode background with no text.

The "①①①①①①①" shot from the video.

The sideways "①①①①①①①" shot from the video.
Add a photo to this gallery

Having entered into a new stage, DDR will have this new song.

Note: When played in 2ndMIX mode, all freeze arrows appear as normal arrows.

Retrieved from "https://dancedancerevolution.fandom.com/wiki/TRIP_MACHINE_EVOLUTION?oldid=14940"
Community content is available under CC-BY-SA unless otherwise noted.